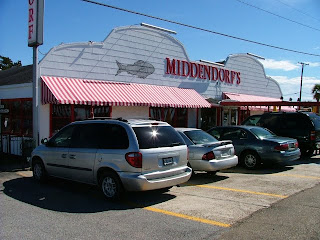 I had been hearing about this restaurant for nearly two years from my friends Beth Fury and Henry Harmison from The NOLA food forum, and on their LADay Rides Blog. " Oh you have to go to Middendorf's, it's great". "Oh yeah? What's so great about it," I would ask. "Thin catfish is their speciality", they would say. This was intriguing to say the least. I love catfish, but sometimes it can be thick and greasy because it takes longer to cook when it's a big fat filet. This thin catfish caught my attention. 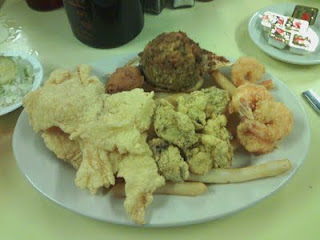 OK, they do not have their catfish on a diet, they just slice them about one third of an inch thick, dust them in a light cornmeal, and deep-fry them nice and crispy for your dining pleasure. Let me say, I had a seafood platter, so as to get a sample of everything, and the catfish was not only the best thing on the plate, but it was the best catfish I have ever eaten... ever! You can't imagine how good this stuff was. I usually have lots of tartar sauce on hand, but I didn't really want to mask the flavor of this catfish delicacy. 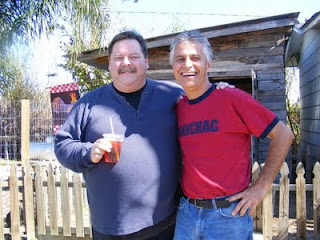 First, a little about the restaurant itself. Started in 1934 by Louis and Josie Middendorf, the restaurant opened with Josie doing the cooking and Louis tending bar and chatting up their customers. In 1970, Middendorf's was already popular, but it became even more so after I-10 opened between Metairie and LaPlace. Then recently the restaurant was purchased from the family by husband and wife Horst and Karen Pfeifer. Knowing a good thing, they haven't changed the recipes or the specialities from the ones that made the place famous. Horst and I are pictured above. 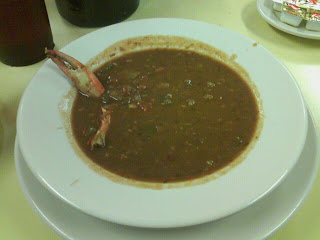 They had a nice gumbo, maybe a little heavy on the worcestershire sauce, but still was nice. The also had crab fingers, (shelled blue crab claws) served with an odd parsley sauce of some sort. The shrimp remoulade looked great as well as the shrimp Po-Boy that Henry ordered. I had some shrimp on my platter and they were very lightly breaded and flavorful. The shrimp and the oysters rounded out the platter very nicely. Nothing could stand up to the catfish though, it was the belle of the ball. 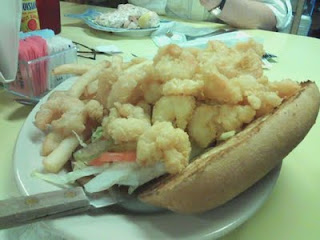 Beth's husband Darryll had the fried oysters, which I got a couple of those on my seafood platter as well, and they were great. Honestly everything I got was great with the exception of the stuffed crab. I am sad to say was very dry and tasteless. Might have gotten a bad one, I am told they are normally quite tasty. If you use too much filler in crab cakes, or deviled crab, it can ruin it. No worry, the rest of the platter more than made up for this unfortunate crustacean. 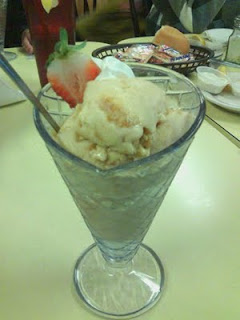 They make their own ice creams and had several flavors on hand including the standard chocolate, vanilla and the best strawberry I ever tasted, and I don't usually like strawberry ice cream. I actually chose the peach, it was alright but I should've had the strawberry. All in all the homemade ice cream was excellent.

Henry, Nan, Barbara, Beth and Darryl were great company, and Beth is a great trip planner. I hadn't seen Barbara in over a year, and it was great meeting Nan, such a sweetie, and Darryl for the first time. We all went to Berry Town Market in Ponchatoulas. It was great. We also did some antiquing, wading deep into the Manchac swamp, and bought some andouille at Jacobs in LaPlace. What a day. Again, Beth and Henry, thank you so much for a great Halloween afternoon and letting me get to know a little more about Louisiana than just New Orleans. Be sure to get out to Middendorf's when visiting the area.

Free PDF download, open it and save it from inside your browser.

RouxBDoo
Bristol, Tennessee, United States
I Love the Cajun and Creole food of New Orleans and South Lousiana. I love to eat it and even more… cook it. I know there are those of you out there that share my passion, I welcome you to my blog.

Add me as a Friend