Okay, here's the deal.  I have rarely, if almost never, have cooked in a crockpot.  I don't even own one.  I had to borrow my neighbor Jessica's crockpot to make this recipe, but I HAD TO, tell you why.

As you folks well know, anytime anything goes viral on the internet, everyone's talking about it.  This recipe was one of those.  This recipe was like an urban legend, so it being close to Halloween I thought I'd make it.  Now there's nothing supernatural about it.  You don't have to chant the words "Pot Roast" in the mirror 13 times for it to appear, but the method is quite strange for cooking this beast.

I found the recipe several times on the blogs and sites and all pretty much stuck to the gospel.  Same ingredients, cooking time, claims of disbelief, but their families loved it.  Some make it every week, some twice a week.

What's funny is in the comment section of the blogs that posted this recipe.  I have always noticed this but for this recipe it was rampant.  After the blogger posted the recipe, about half of the comments were "Awesome", "Amazing", "Delicious", but then the other half, while complimenting them, kept posting what they did different form the recipe.  It would be like, "Well we're watching our sodium, fat, red meat, and can't have anything spicy, so I substituted red wine for the au jus, left out the ranch mix completely, exchanged the beef for chicken, and substituted the pepperoncini peppers with kumquats.  It was awful."

So I made the recipe EXACTLY as written, (I did add 3 extra peperoncinis since they were small) and cooked it overnight in my neighbor's crockpot.  The next morning the air was heavy with savory beef fumes.  This thing smelled GREAT! I quickly made a pan of biscuits and tried out my roast beast.

Now, I will tell you this up front, I expected it to be so tender it would fall apart before you could lift it with a fork.  It wasn't quite that way.  It was tender-ish, but did it ever have a great flavor.  Man the meat and resulting au jus, (gravy) was amazing.  Those little peppers added the right combination along with the mixes I added.  You have to give this recipe a spin when you can.  Maybe an upgrade in the grade of chuck roast, or longer cooking time might make the tender factor elevate.

Be sure if you make this, and love it, to tell me what all you did different from the recipe in the comments you leave.  Just kidding, I rarely get comments except from my friend Ramona, whom I love for reading my blog every time.

Preparation
Spray your crockpot with non-stick cooking spray, place roast in the pot, cover top with ranch mix and cover that with au jus mix.  Lay the stick of butter on top and scatter the pepperoncinis over the top of the powder covered roast.  Replace lid and cook for 8 hrs on LOW.

Now, here's the warning.  DO NOT ADD WATER.  This roast makes its own juice and blends it with the butter and mixes and... oh bru-thuh is it good.  Try it over biscuits like I did, you'll thank me with a big ol' sloppy kiss.

That's it!  Can't mess it up.  If you do, please write me a comment telling me what you did to mess this up.  I'll add it to the "we used wine" "we hate peppers" "I'm a vegetarian, can I make this without meat" comments which always follow a recipe like this. 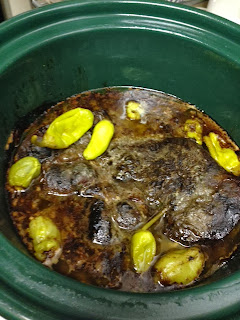 Drag out that crockpot of yours, or borrow the neighbor's, run to the store and make this recipe.  Else you'll always wonder if it was true... what they said about that roast on the internet.  Oooooooooo.

"Don't believe everything you read on the Internet" -Abraham Lincoln

I'll have some Halloween fun on here in a few days.  Keep the SPIRIT!

Free PDF download, open it and save it from inside your browser.

RouxBDoo
Bristol, Tennessee, United States
I Love the Cajun and Creole food of New Orleans and South Lousiana. I love to eat it and even more… cook it. I know there are those of you out there that share my passion, I welcome you to my blog.

Add me as a Friend